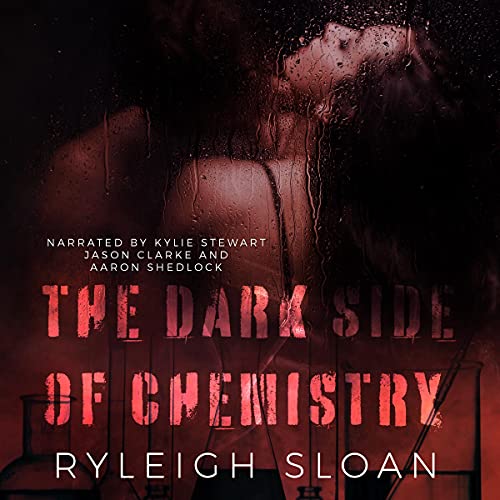 This is super exciting! The Dark Side of Chemistry Audiobook, narrated by Kylie Stewart, Jason Clarke, and Aaron Shedlock is now Live!

Go here to get it! If you’re not already an Audible member, it’s free with your 30-day trial!

Check out The Dark Side Of Chemistry’s new cover and blurb! 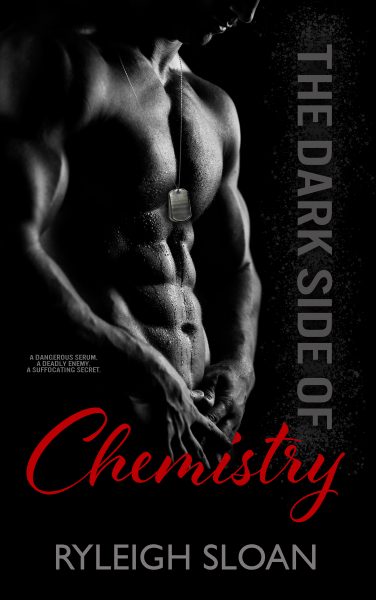 A dangerous serum. A deadly enemy. A suffocating secret.

I didn’t know it was possible to be in love with two people at the same time, until my past and present collided.

Jensen was unpredictable and compelling, until he shattered my heart when he was deployed.

Trent is loving and dependable, and I can easily envision a future in his arms.

I had no way to know the two were brothers. I fear I will be what tears them apart.

When Trent is deployed to Afghanistan to test a highly classified serum, I can’t shake the feeling of dread. My fears are quickly justified. An unknown enemy knows my dark secret, and plans to use it against us.

I made a mistake once, and now it could destroy everyone I love.

Add to your TBR: www.goodreads.com/book/show/42981001-the-dark-side-of-chemistry 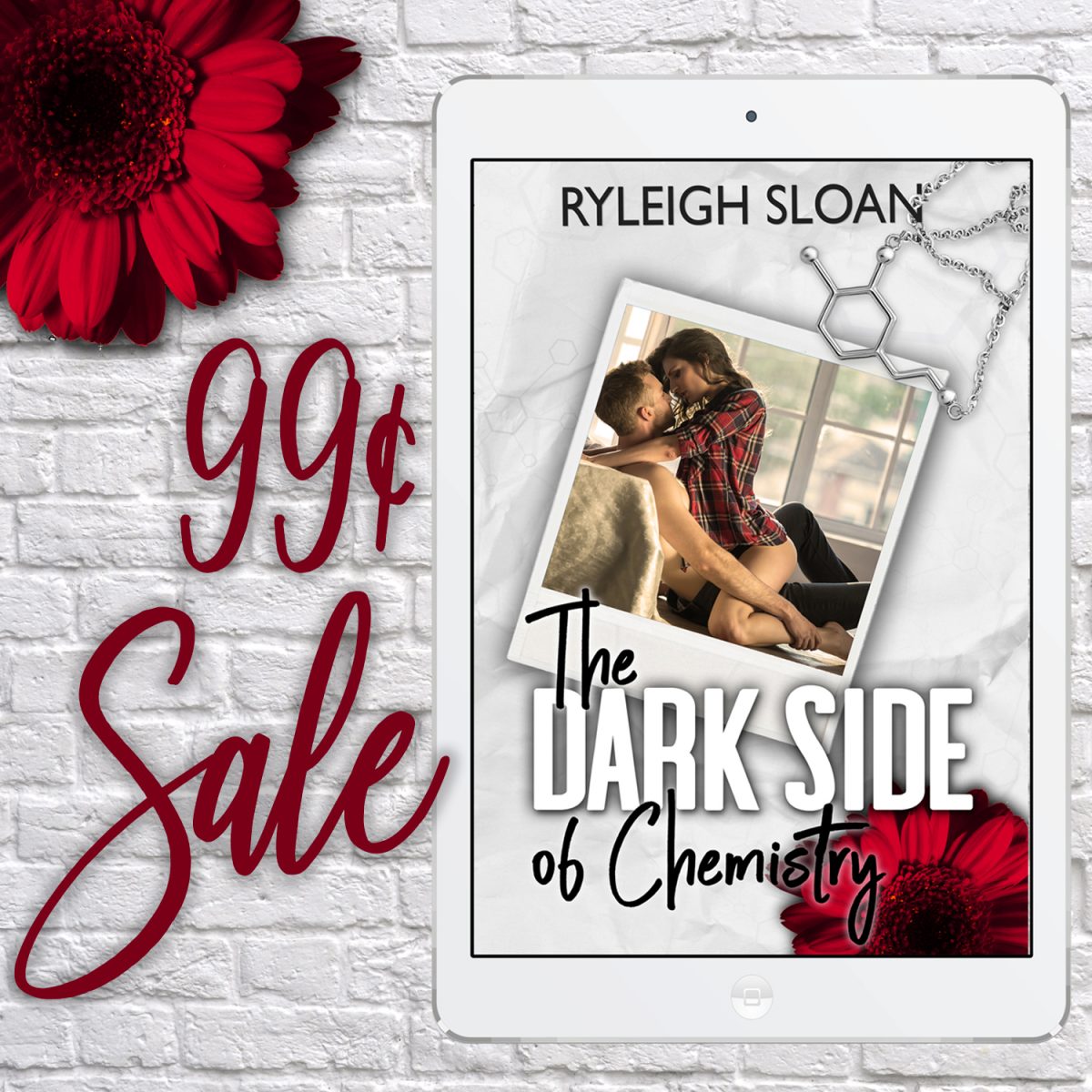 What would you do if you were in love with two brothers and that mistake ruined all your lives?

Find out more!
The Dark Side of Chemistry is on sale until Oct 2nd for only $0.99! 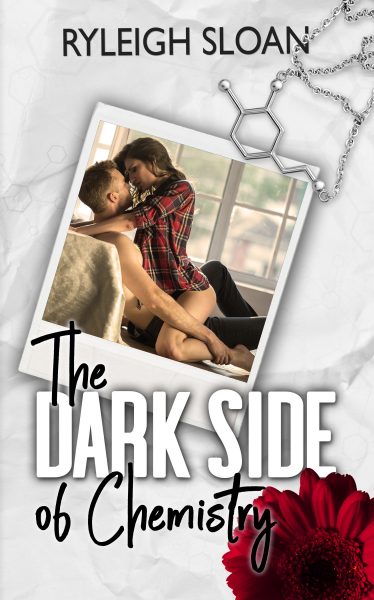 Genre: Romantic Suspense
Cover Design: Spines and Designs
Release Date: March 25, 2019
Blurb
One mistake.
They say you can’t be in love with two people at the same time, but that’s
exactly what happened to me. I knew it would catch up with me one day but I didn’t expect that when I went down, I’d take Trent and Jensen along with me. Trent has always been the loving and dependable one—Jensen, unpredictable, cruel . . . and compelling.When Trent was given orders to deploy to Afghanistan to test a highly classified and dangerous serum, I couldn’t shake the feeling that life was about to irrevocably change. Little did I know how much. My secret was just what an unknown enemy needed to destroy our lives.

I made a mistake once, and now we’re all paying for it …

We were nearly there when I noticed the Lt. Colonel staggering toward us from the elevator on the opposite side of the hallway. I thought fast on my feet and did the only thing I could do—and quite frankly the only thing I’d wanted to do since I saw Skyla in her hotel room. I grabbed her face and kissed her with such intensity it took my breath away.

Pulling her closer to me, I deepened the kiss; flicking my tongue over hers, a low groan escaped my lips. Up to this moment, I hadn’t realized just how much I’d missed her lips on mine, craved the taste of her. In that moment, I realized how it must feel for an addict when he gets his fix. Her hands curled into my hair and as I looked into her face, I was shocked at what I saw there. She wanted me, I could see it in her eyes, feel it in the hands that were roaming my back. She was so close to me that I could feel her heart racing beneath the thin material of her dress and frantic need overwhelmed me. I ran my hands down her waist to her tight ass and pulled her hips flush with mine, my cock pressed against her stomach. When she closed her eyes and whimpered ever so softly, I started walking us toward Stephenson’s room. I would have her, I had to have her. A sound penetrated the haze of lust and without breaking the kiss, I flicked my eyes in the direction of the sound. The Lt. Colonel had just stumbled into his room and was closing the door. It was as though a bucket of ice was thrown over me.

What the hell was I doing? And what was she doing kissing me back that way? She was Trent’s.

My hands shot out to Skyla’s shoulders and I pushed her back. The surprise and hurt radiating from her face fueled my anger. I wanted to hurt her the way she hurt me—show her what it felt like to have her feelings disregarded.

“Easy there, tiger, I know Trent’s been away for a while and you are . . . frustrated . . . but I’m not into my brother’s sloppy seconds.” I watched the deep red flush creep up her neck and knew I’d gone too far, but I couldn’t stop myself. Forcing a chuckle from my throat, I walked away, leaving her gaping after me.

“What the hell, Jensen?” Skyla yelled, grabbing my shoulder and catching me off guard, so my back slammed into the wall. She jabbed her finger into my chest and all I could do was blink at her. “You kissed me, your hands were all over me!”

I pulled my lip into an arrogant sneer I didn’t feel. The same look I’d given her countless times to hide the pain. I leaned in, my lips brushing her ear. I felt her shiver and loaded my voice with contempt. “Don’t get your panties in a bunch. Stephenson was coming and I had to do something to save us from suspicion. We’re on an assignment, Sky. Not a real date. Don’t get pissy with me because you got carried away by a simple kiss.”

Her hand came around to slap me across the face but I saw it coming and grabbed her wrist. Squeezing hard, my eyes narrowed into thin slits as I looked down at her.

“Watch yourself, Skyla, we wouldn’t want Trent to pick on the underlying . . . tension between us now would we?” Seeing the look of panic on her face, I added bitterly, “Don’t worry, I won’t tell if you don’t. I mean, what’s one more secret between us, right?”

Turning on my heel, I left her there to glare after me and descended the stairwell to the ballroom. I fucking hated myself.

I woke to the sound of waves crashing on the shore and an empty bed. The uneasy feeling from the previous evening settled in the pit of my stomach as I turned over and stared absently at the sunrise through the open blinds. It was beautiful, all pale peach and powder blues surrounding the luminous orange orb, but I was too distracted to take it in. I couldn’t put my finger on it, but something was off with Trent and whatever was on his mind, he’d used some really interesting distraction techniques to throw me off the trail. But now that I wasn’t sexed stupid, I needed answers.

Forcing myself out of bed, I picked up Trent’s shirt from the floor and slipped it over my head. Running my fingers through my hair in an effort to tame my bed-head, I dragged my languid self to the kitchen. As I inhaled the aroma of brewing coffee, I almost forgot about Trent’s lies. Okay, so he hadn’t actually lied to me but he was definitely keeping something from me and as far as I was concerned those two things were one and the same. The truth was, if anyone was an expert on lies of omission, it was me. My biggest secret was one that had my stomach twisting with guilt daily, but I was too deep into it to do anything now. I’d just have to live with my secret and hope it never came to light.

From the kitchen window I spotted Trent lying on the hammock. Damn the man was all types of fine. Wearing only his boxers, one arm hanging over the side of the hammock, the other over his eyes. His perfectly defined sun touched abs making my fingers itch to touch. I poured two cups of coffee and headed out to the beautifully secluded garden I loved. As I stepped outside, I took a moment to appreciate my surroundings, to feel the crisp touch of the ocean’s breeze against my skin, to breathe it in as it slipped through the palms and shrubs which were artfully situated so as to lend the desired privacy from the sparkling beach just beyond. My feet hardly made a sound but as I approached, Trent lifted his arm from his eyes. His smile took my breath away. God, I loved him.

“Hey, gorgeous, how did you sleep?” END_OF_DOCUMENT_TOKEN_TO_BE_REPLACED

Signup for news and special offers!

You have been sent a confirmation email to confirm your subscription to my newsletter. Please check your spam folder if you don't see it promptly.